Purchase permanent copies of our past issues for your Kindle or eReader to support the magazine and discover more fantastical worlds and characters. 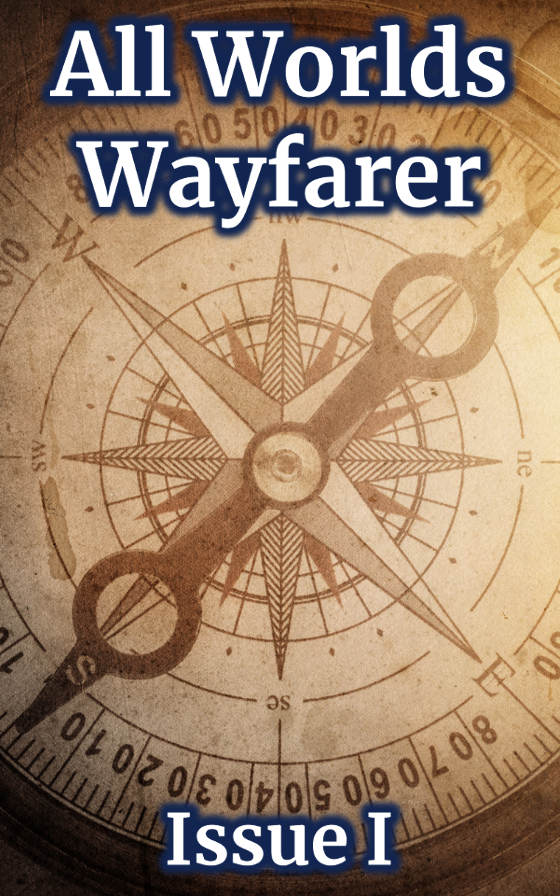 The Impossible Bird by Jamie Lackey
"'You can't be real,' Tommy whispered. 'There are no blue jays in Europe.'"

Taking Root by dave ring
"In the forest they were wild things."

Better to Curse the Dark than Light a Candle by Joseph Cusumano
"I must find a soul darker than my own."

Three Hundred and Forty-Nine by Gerri Leen
"Inside him, a war goes on between the programming that makes him give chase and the need to rebel that he feels each time his queen’s mind touches his."

The Sphere by Garrett Rowlan
"'The circle holds the fundamental fact of existence,' she had told him once."

Never Ending Litany by Diane Arrelle
"I heard it, the call, but it was daytime faint."

Leanan Sidhe by Lucy Stone
"When he was in the music—when he was the music—it opened up a space inside his head where he could be himself, just for the length of a canto."

Intergalactic Litany by Kayleigh Shoen
"As if the Universe were built for granting wishes."

The Tower by Jay Caselberg
"Now why, you ask, would you cast an infant from the very peak of a stone edifice?"

For the Sake of Mushrooms by Mary E. Lowd
"In the belly of the red giant, could Irudy find her lost home?"

When Wizards Sing by Steve Carr
"Then silence fell, and I lay upon the whale's back and held my breath."

Dreams of the Docent by Lee Clark Zumpe
"I told myself that the dreams would not follow me home from Shady Haven."

The Lighthouse by Sharon Frame Gay
"She returned to bed before dawn, smelling of the sea, her body slipping next to mine when the sparrows began to sing."

Not Locks but Keys by Michael Walker
"He played the poem over in his mind. In the small, floating part of his mind that still belonged to him."

The Melodic Travels of a Man Selling Lives by Dennis Mombauer
"The countdown began, the shell enveloped Marcus—and all of a sudden, softly and without warning, he heard the music again, the exact same melody, in the exact same moment before the entry into foldspace."

Muzi's Boon by Drema Deòraich
"The sight of villagers crowding her at every Flowering to beg selfish boons turned my stomach."

Players by Astra Crompton
"The itch in my code is excruciating now; a punishment for my disobedience but a price I am willing to pay."

I Wanted You to be Happy by Alexandra Grunberg
"The reason for the end of the world, was me."

A Fitting End by Tom Howard
"It would have been nice to have friends who existed outside of books, her only companions during her battle with DIPG."

The Waves by Lara Alonso Corona
"But you get used to all sorts of things. Like having the Old Town underwater."

Stowaway by John Visclosky
"She knew that Venus was not like Earth. On Venus, there was still work. It was a planet with a future, where even a girl from a dusty village could be whatever she wanted."

Reflections by Hugh McStay
"It was through the mirrors that the nightmares came."

A Cure for Spring by Larina Warnock
"'I wanted…' Carmyne gasped between every word. 'I wanted it to feel like the end of everything.'"

The Linear Concept of Time by C. S. Lytal
"'But maybe they can’t come back to us. Maybe we have to go to them,' I say, thinking of the tunnel of darkness and stars." 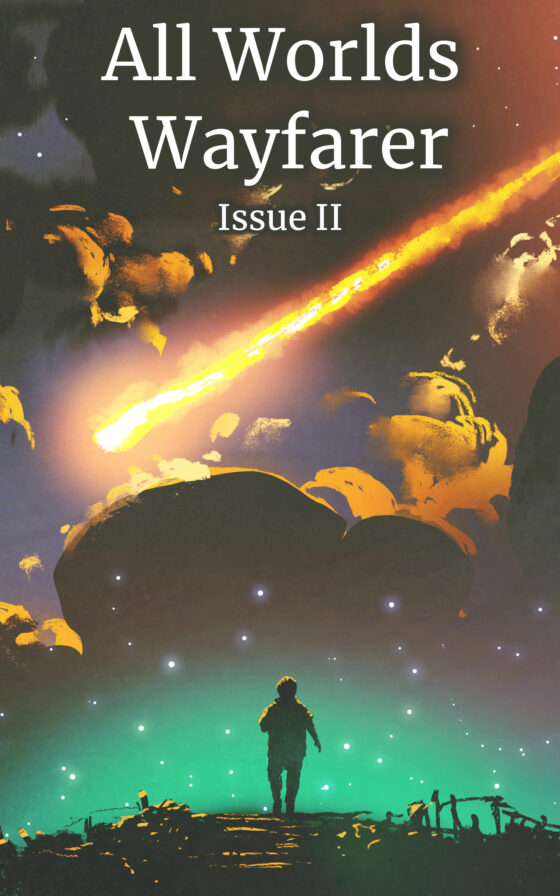 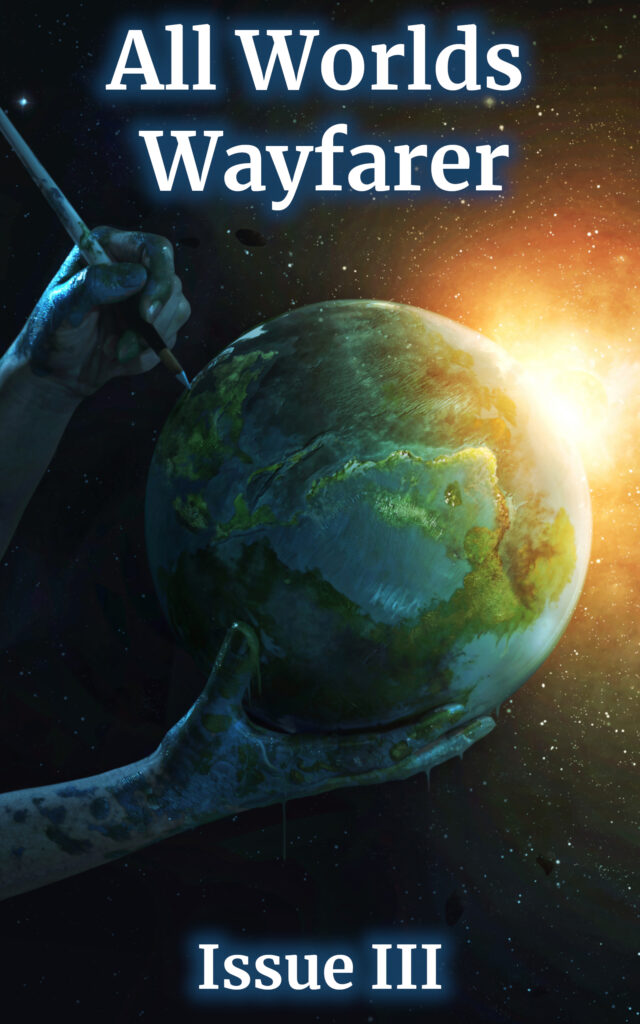 The Children of Gods by MM Schreier
"She didn’t answer. Instead, she reached out with her pail and scooped up asteroids, meteorites, stardust."

The Fool by Ashley Clayson
"Tori hated that phrase, time travel. As if that was all she was doing. As if she wasn’t one of the world’s leading experts in tempo-spatial multiverse splits."

Dragon Crossing by Jennifer Shelby
"Gavin recognized it now. The sound of a dragon in mourning. He’d imagined this when he thought of what his funeral might be like."

Priestess of the Waters by Rebecca Buchanan
"Sallali pulled out the clove cigarette and rolled it between his fingers: a nervous tell. 'The nymphs won’t let the body go.'”

La Pequeña Roja by Abby Vogler
"It wasn't a real island, not like the ones that the old folks talked about. Their islands were dome-shaped concrete houses that dotted the Okaloosa wetlands like bubbles in bath water."

Children of the Pulsars by Matthew Winchester
"It had cost him $1500 to get it there—there being a rocky exoplanet dubbed Tiyan-54b. He had chosen it because it was unpopular, drawing significantly less traffic than the many earth-likes that clogged Instagram feeds."

Ari and the Tiger by H.R. Wasserstein
"Ari can’t remember her life before the tiger stalked her. She steps out into the sun, feels the warmth of it on her skin, and knows that he is there."

The Mangaka Lover by Russell Hemmell
"'You can’t make love…because of one of your characters? Is he jealous, maybe?' I tried to keep the incredulity out of my voice, but irony seeped in nonetheless."

The Rat-Bug War by Avra Margariti
"'You want the bugs to lay eggs in your ears? The rats to gnaw your bones? Fine by me. Just warn me next time I decide to keep you safe.'"

Lost Loves by Joyce Reynolds-Ward
"We reached the space where the woman and the horse had disappeared into the wall and Sox stopped. He nuzzled the wall twice, then repeated his mournful whicker."

Candlelight by Barry Charman
"Is this a dream? An understandable thought. A necessary one, for sanity. You remember blowing out the black candle. The one you were warned not to light."

Last Night on Earth by Steve Haywood
"More than anything right then, I wanted to see one last sunset."

Hettie Johnson and the Orb Rider by Paul Stansbury
"'Out there,' Solasta calmly answered, gesturing toward the sky, 'beyond your sun, beyond your galaxy, to the farthest star you can see. Out there, wonders await.'"

In Between Saturday Morning Cartoons by Katherine Bergeron
"Slowly, you became aware of a presence in the room. You caught their scent before you could see them—they smelled like the hot dust on a television vent."

After You by Hamilton Perez
"'Cheer up,' she says. 'The fire and brimstone’s only on this side.'"

Scavengers by Chrissie Rohrman
"She has been all over the galaxy, has seen men killed before her eyes, but has never felt an immediacy of danger quite like this."

Found by E. A. Petricone
"Make me like you, Melissai whispered. The bee alighted upon the whorl of Melissai’s fingertip, as though he would hear her plea."

Appetence by Kevin Kekic
"She still remembers its sweetness. The blood and meat. The crunch of bone between her teeth."

Freshmint by M. B. Vujacic
"'I don't give a damn what Gabe thinks. I'm not risking my life for a box of goddamn hookah tobacco.'"

Glazed Eyes by Brian Ennis
"'Come, one and all,' the Marionettist cried. "Come and be entertained!'"

A Decent Person by Rowan Rook (Kindle Edition Bonus Story)
"'No,' Silver assured, 'I cannot hurt a human for any reason.'"

Back to the Killing Field by Brenda Anderson
"Then they’d found her head, face upward, soil embedded in her partly-opened mouth. From it, flowers had sprung up."

Reality Rip by Elana Gomel
"What I had seen in the Red Bluff rip had seared itself upon my brain."

I Am Mazillion by Mary E. Lowd
"A tenth of my bodies died on that trip through deep, cold space. Decimated. I wondered so many times if it was worth it."

The Nordlyset by T. D. Komoff
"Snow didn’t have memories. Any impressions he made would be wiped away by wind and storms, leaving nothing but an empty peace." 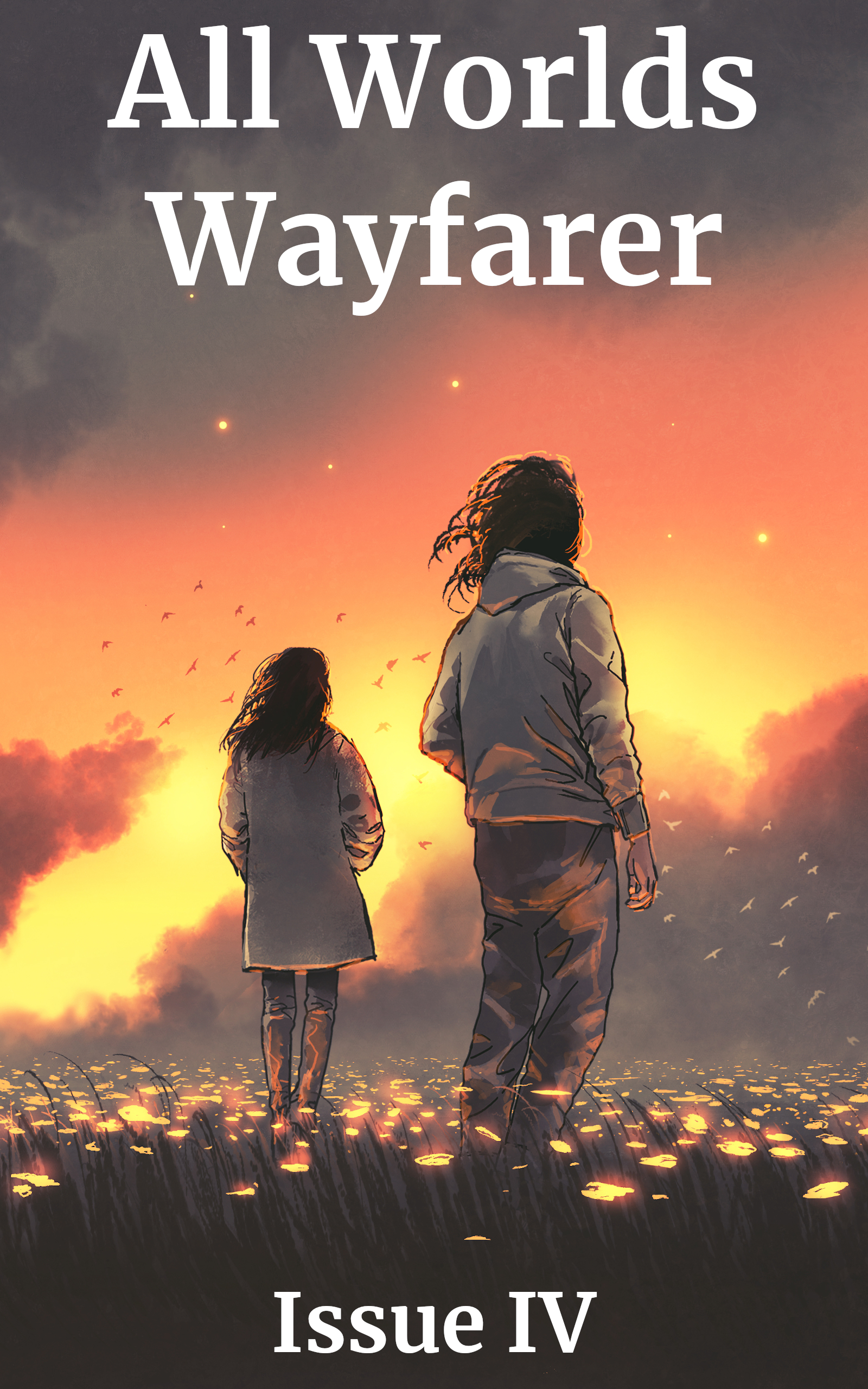 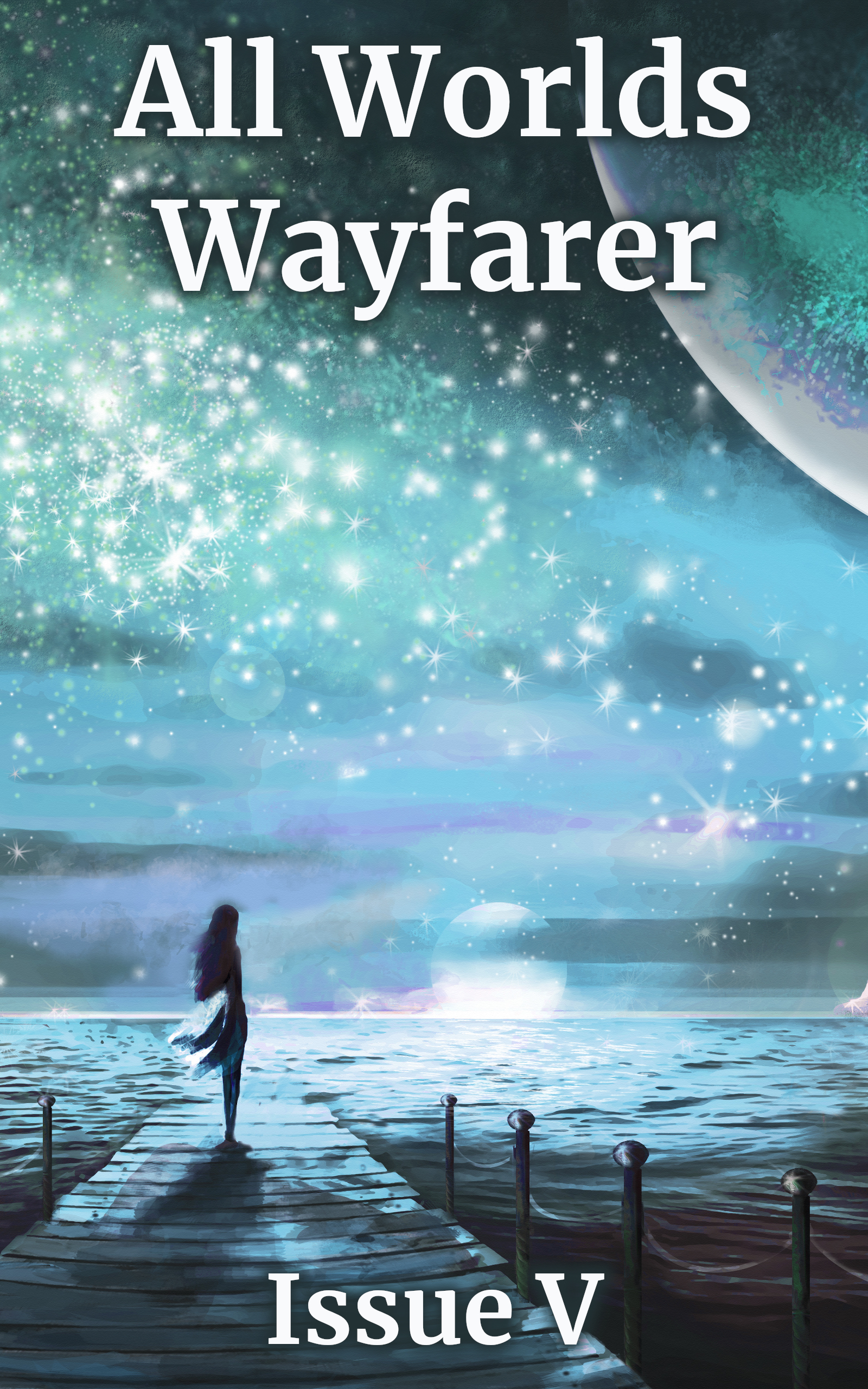 Wolf by Carla Durbach
"The scents of human sweat, wildfire, and fear rise like water vapor in the frosted midnight air."

Cinnamon and Copper by E. J. Sidle
"When I see him, my mouth fills with teeth."

The Hanging Tree by Chris Reeve
"I cannot shake the idea that we have somehow set something in motion, something that can’t be stopped."

Metallic Sun by Garrett Rowlan
"She thought she saw something, a brightness in the dark, a sign of artificial life: a hint of light behind the eyes."

In the Silent Garden by Rebecca Buchanan
"She stared, sightless and still, into the distance, her body covered in cold moss."

Scenes from the End of a World by Steward C Baker
"'Greetings, lottery winners!' said the man in the holo, smiling too broadly to be sincere. 'And welcome to the future.'"

The House at the Lakeside by Prisha Mehta
"But there was nothing there, only the sunlight, dampened by the rain, and the lake hissing up at me like a thousand shards of glass."

Bob's Emporium of Wonders by Matt Gomez
"'Is this the kind of place where you sell me something, and in the end, I realize I had what it took all along to fix my problems?'"

Transfer by Esther Clark
"There are three doors. One is bright blue like topaz; one is a deep red, like wine; one is pitch black with white trim."

The Return by L. D. Oxford
"In her dreams, she returned to the island."

The Road to Salvation by Eva Schultz
"Here he was, walking down a makeshift street in the desert to his father and his fate."

The Fear Inventory by Elizabeth Guilt
"'I will have your fear, it will be mine to enjoy. I will be able to taste it when you dream your worst nightmares.'"

The Guardian by Geri Meyers (Kindle Edition Bonus Story)
"'What sort of queen could you be without command of your guardian?'"

When the Sand Runs Out by Addison Rizer
"The end of the world was lonely, but so had the world been before. At least now we could blame it on the virus when our smiles didn’t reach our eyes."